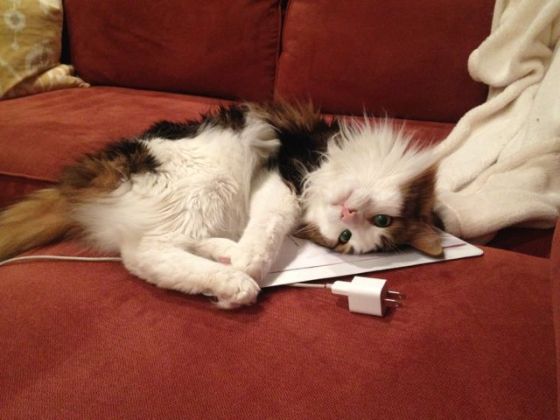 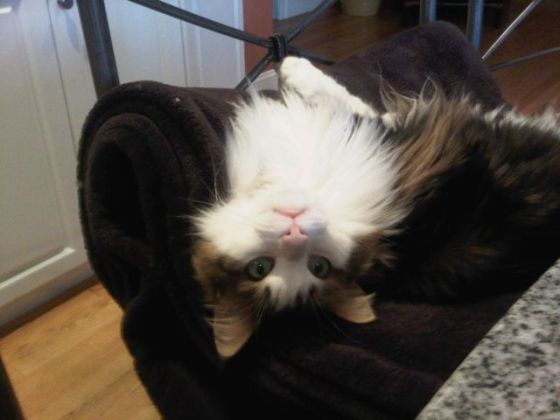 Little Gus was technically a cat, but somehow he was far more. Perhaps part dog and part human, he was his own breed. He always wanted to be with people and always had love to give. 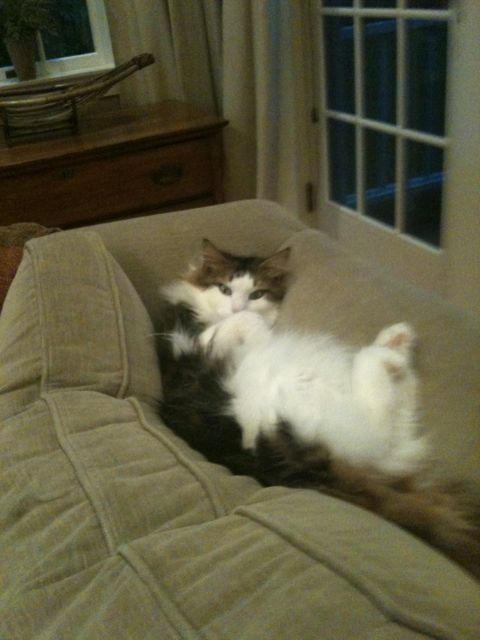 Gus didn’t have a mean bone in his body. He was so sweet, I swear he was made of pure sugar. Such a friendly and innocent little fellow, he even made converts out of “non-cat people” and “cat haters.” 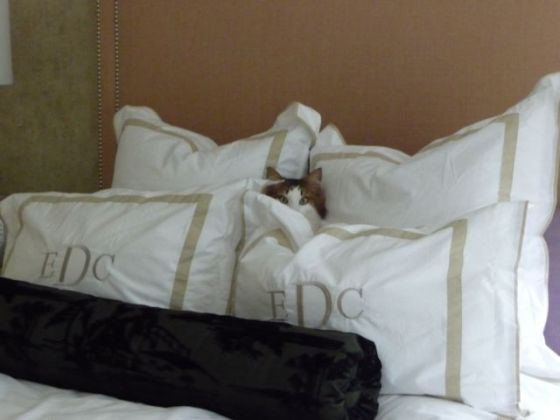 Call me a crazy cat lady all you want, but Gus and I definitely had conversations. 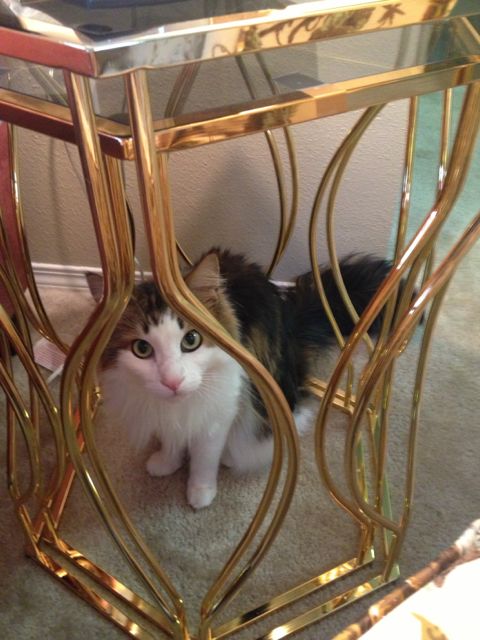 He would be looking for me, saying what surely sounded to me like “He-lloooo.” It was one short meow and then one long.

He would say, “Meow, meoooow.”

And we would repeat this several times until he found me and came trotting around the corner, his little fur trousers swaying side to side. 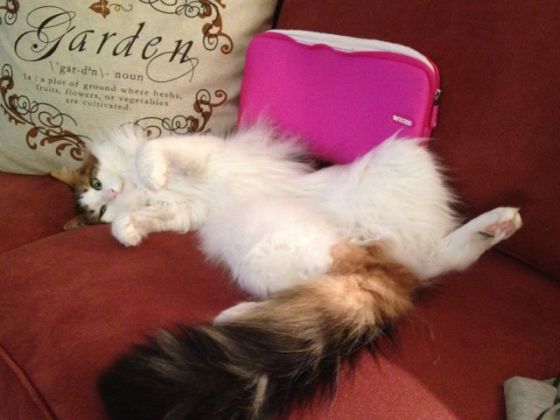 I was certainly as much a fool for Gus as he was for me. I would sing to him “Rock-a-bye Gussy” And “You Are My Sunshine.” As I cradled him like a baby with his paws in the air and rocking him side to side, he would look up at me with those big green eyes. I’m sure he was thinking something along the lines of “I have no idea what that sound is coming out of your mouth, but I think it comes from a good place and I love you. But please don’t quit your day job.” 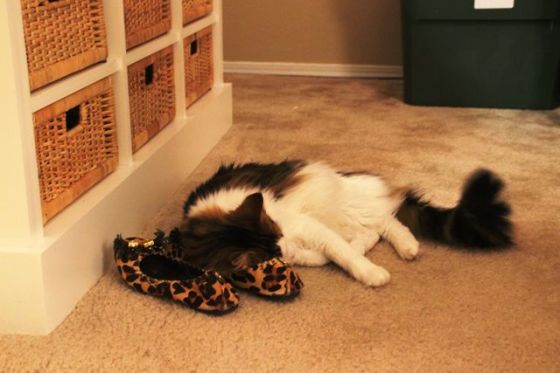 Oh how he loved shoes. He was a bit metro, I suppose. Particularly when I would return from being gone longer than usual, the moment I took off my shoes he was over snuggling up to them. 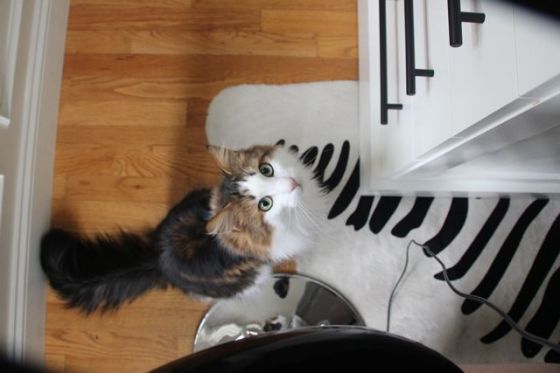 We almost lost him three years ago to acute kidney failure when he was just four years old. The vet said his numbers were so low, she was amazed he was alive and that we would be lucky to have him through that weekend. He made it through the weekend, and the next week and the week after that, slowly but surely regaining his strength and cheerful attitude.   The past three years, he was on borrowed time, but it still seems far too soon to lose such a special little guy. He was a miracle in so many ways.

I really believe that he stayed with us to make sure that my move south went well, that I was happy and settled. He knew I needed him and he was always there to keep me company. 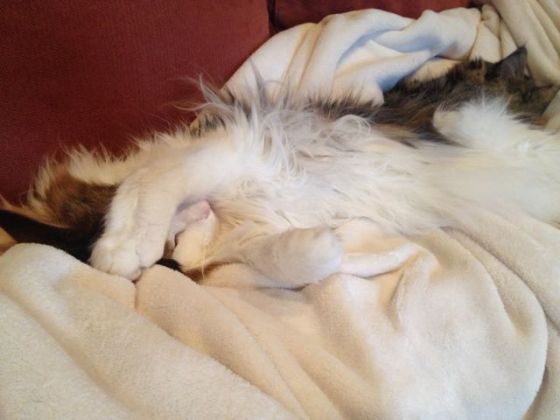 Thankfully, I took up blogging and got a new camera before I moved. That gave me the excuse to take a million pictures of my cats. I’m sure my blog readers got a little tired of the cat posts. But, hey, they were my willing (and only) subjects in my little apartment and now I have album upon album of Gus pictures. I will forever treasure the countless Gus expressions I was able to capture. He was such a character. 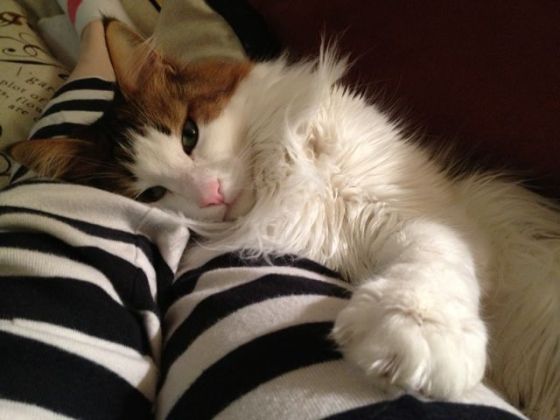 Last night, he was curled up against my legs on the sofa as usual as we watched the news. He tucked me into bed, rubbing up against me and hugging my face with his tail. I pointed out to Eugene how loudly he was purring. He was so content to be there with us. 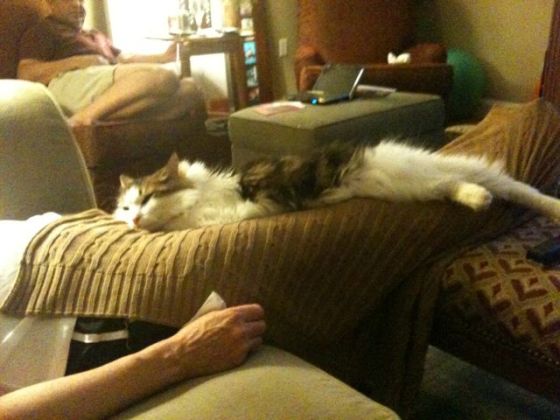 We found him this morning laying like he always does on the kitchen floor where it’s nice and cool.   He looked so peaceful. The vet said it was likely a blood clot, sudden and unpreventable. I’m so thankful he didn’t suffer. I just can’t believe he’s gone. 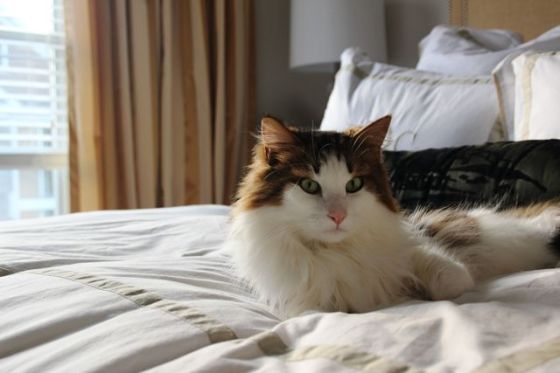 You make me happy when skies are grey

You never know, dear, how much I love you,

Please don’t take my sunshine away.

Even though you’re not here anymore, I know your light will always be shining down on us.

I have eliminated coffee from my diet.  It’s a dark time in my life.  Mostly because I can’t keep my eyelids open.

I’m thinking of substituting green tea so I will have something hot and caffeinated to drink in the morning even though I don’t really like tea, even sweet iced tea (gasp), the drink of the South.

I’ll report back on my java-less journey in the near future.

On the bright side, the sun finally came out this weekend after a week of cold, raw gloom and doom. 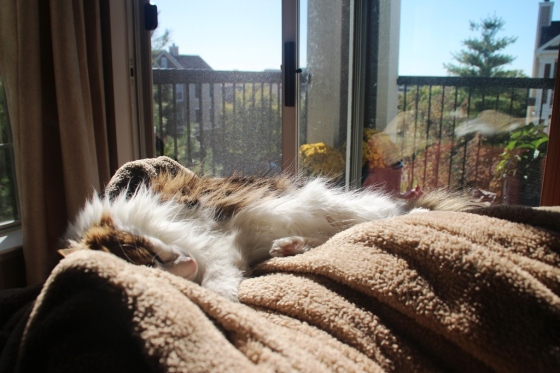 I took this picture in the fall, but the weather was much like this today and yesterday.  Not a cloud in the sky and warm enough to go out without a coat.

This little fur coat here spends the majority of his days as pictured.  He does not, however, empathize with my coffee-less existence and therefore does not understand why I don’t want to get up at 6:30AM to feed him, no matter how loudly and pitifully he meows or how many times he punches me in the face.

It’s been a rude adjustment, but I think it’s for the best (yawn).

Y’all hold ‘er in the road,

Scarlett loves to sprawl out on the floor, especially in warm places where the sun shines and there are electrical wires to sit on.   She flops down in these spots and forgets all of her troubles.   Because in … END_OF_DOCUMENT_TOKEN_TO_BE_REPLACED

Thank you to Elisa Cashiola at http://elisacashiola.com/ for nominating me for the Sunshine Award! I am just tickled. 🙂  As a designer myself, I have a great appreciation for what you do and share. Your posts offer wonderful lessons on making … END_OF_DOCUMENT_TOKEN_TO_BE_REPLACED

If it’s not already clear by my posts about weather and skies, I would like to use this opportunity to share with you that I’m obsessed with weather and skies. I take a lot of pictures of sunsets from my … END_OF_DOCUMENT_TOKEN_TO_BE_REPLACED