I was big stuff when I was little.

Here I am showing the foundation of my childhood home in Philadelphia who’s boss.   (The reality is that my dad probably asked me to go stand out in the middle of the foundation for a sense of scale.)

Prior to living in Philadelphia, we lived in Maryland, where my sister and I were born.  Here I am standing at the front door ready to head out for doubles.  I always hiked up one pant leg for good measure. 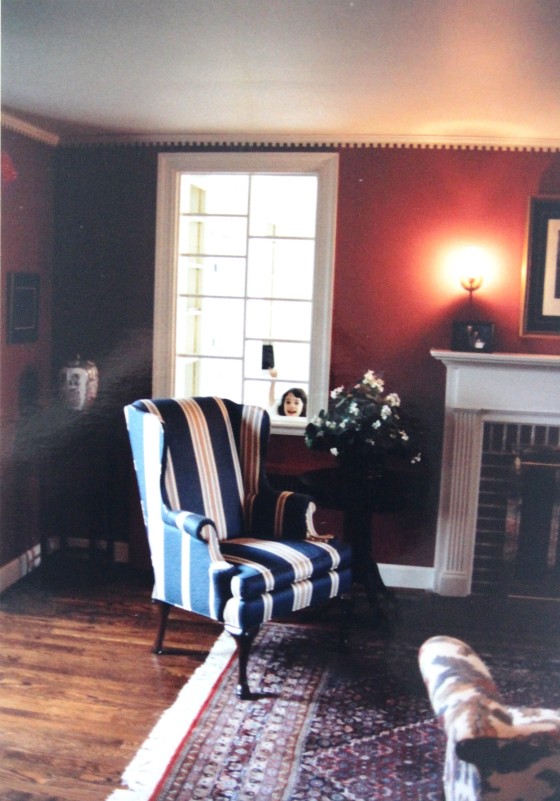 I don’t know what I am waving around in my hand in this photo.  My hypothesis is that it was a VHS that I wanted my dad to come put in the VCR in the sunroom. 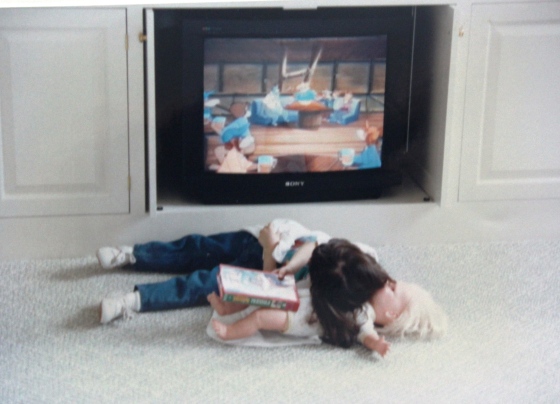 After my baby doll had worn out her welcome, I used her as a pillow when watching TV on the floor.  I was a very resourceful toddler.

When I was even smaller, I used to help Papa check on the cattle. 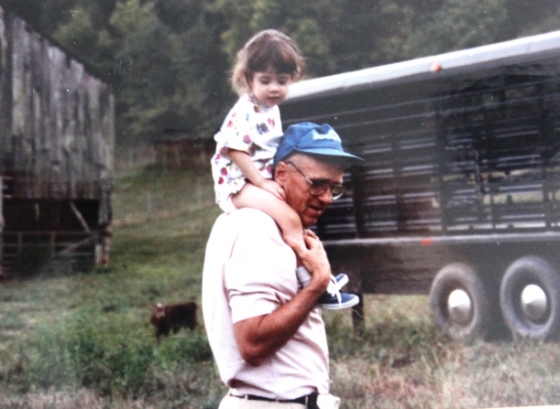 I was taller than Papa.

Granny and I would sit on the front walk and have serious discussions about all kinds of things…like Barbie, Barney, and the Berenstain bears. 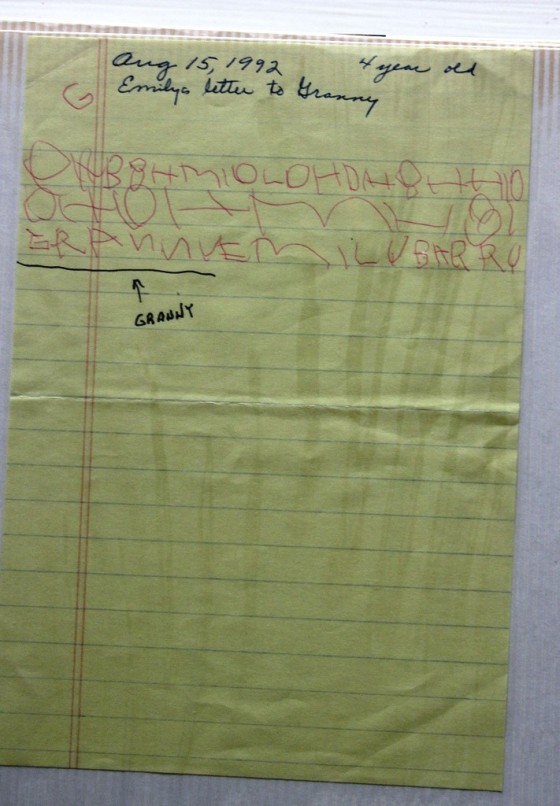 I even wrote letters to Granny before I could read.  Here is one written the year my sister, who is now a junior in college, was born.  It appears that I wrote largely in code, except for Granny’s name.

Man, I sure got my money’s worth out of childhood.

When we were little, cousin Lauren and I were a seriously dynamic duo. Every time I would come to visit, we got into all sorts of things at Granny and Papa’s. We had miniature chairs (which I believe had been … END_OF_DOCUMENT_TOKEN_TO_BE_REPLACED

When I was in Burkesville the weekend before last, trying to do some super sneaky research for my barn quilt square, I asked Papa if there were any old cast iron skillets that I could have.  He had mentioned that there might be some in the basement that had come from my great grandparents’ house.  We went down to the basement to investigate.

Well, find a cast iron skillet we did not.  But, we did unearth a bunch of really old stuff. 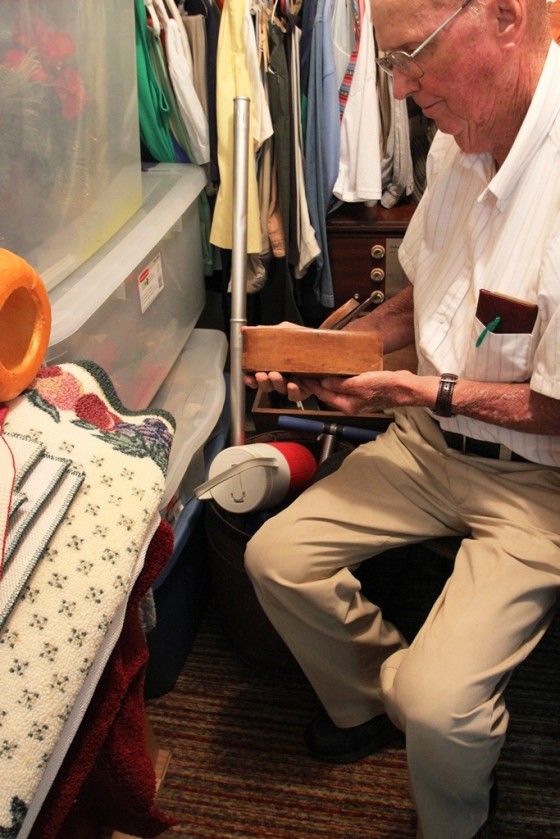 This is an old hand plane that must have been my great grandfather Daddy Barnie’s.   Papa mentioned that my Dad would probably really like to have this since he is into woodworking.

I’m not really sure how old this is, but I think it’s hilarious.  I need to find out the scoop on this “antique.”

Some of my dad’s old trophies.

8-Track tapes.  This form of technology was phased out before I existed. 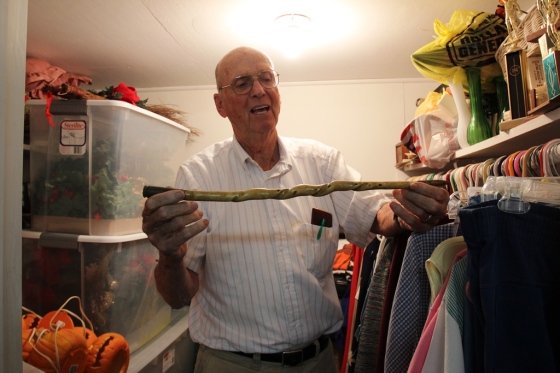 This here was Papa’s pointer when he was in the army, training soldiers at Fort Chaffee in Arkansas.   Apparently, if you were in charge, you had a pointer, but not just any pointer.  The body of this pointer is made from a hackberry branch that had been overtaken by a vine, thus leaving it grooved in a spiral shape.  The ends are a bullet and a casing from a 50 caliber machine gun.  I would take that pointer pretty seriously if I were you.

This little contraption is a butter churn.  Mama Bersie, Papa’s mother, made all of her own butter.  Often, it was Papa’s duty to churn the butter, a job he says he did not much care for. 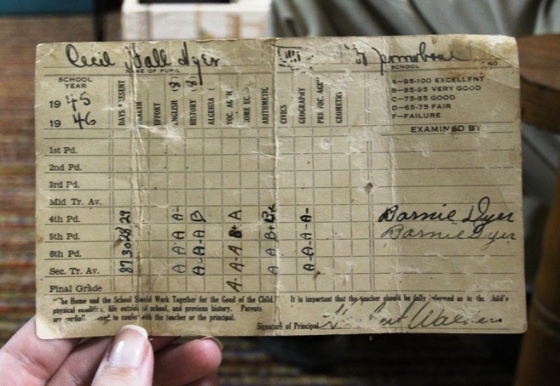 Papa’s report card from a few years back.  Looks like he was a good student. 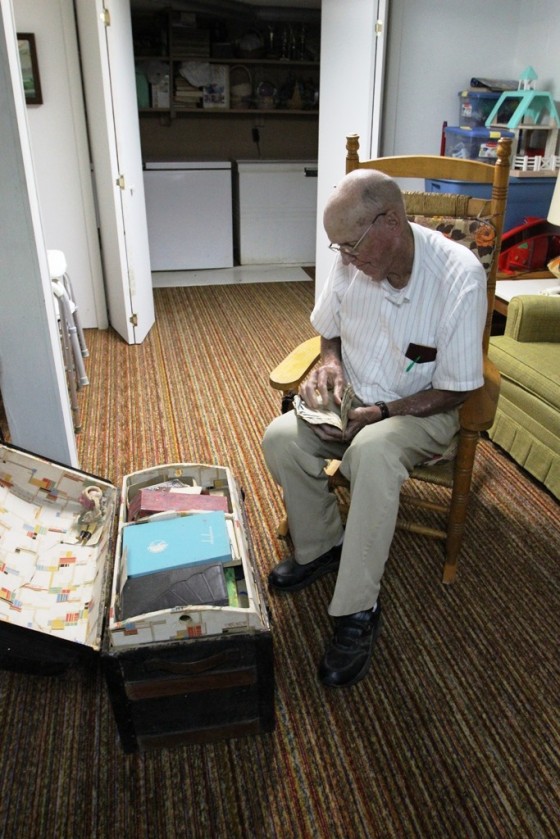 Papa pulled out Mama Bersie’s trunk and showed me some really neat and REALLY old treasures. 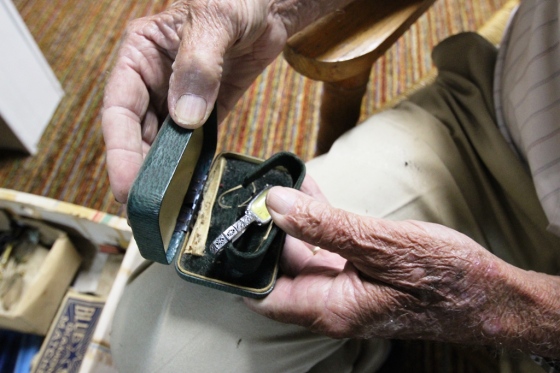 Mama Bersie’s first watch.  This must be at least 75 years old.

Letters that Papa wrote to Mama Bersie and Daddy Barnie while he was in college at the University of Kentucky.  I will have to read these someday.

Wrigley’s Juicy Fruit gum that Daddy Barnie gave to Mama Bersie when they were “courting.”  This stuff is older than Papa.  I wonder if it still has any flavor…

Papa’s housing fee at UK for the semester: $51.00.  I’m not sure that would cover one night of housing in a dorm these days.

Tuition certainly has gone up over the past 61 years.  There are very few textbooks these days that cost as little as $61.50 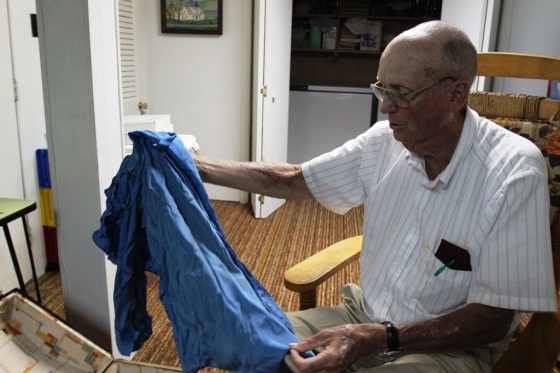 This is what Papa really wanted to show me.  It’s Mama Bersie’s blue silk wedding dress from over 80 years ago, ordered from the Sears catalog.  Papa requested that if/when each of us granddaughters gets married that we sew a little piece of Mama Bersie’s dress into ours.  Not only would that be a great treasure on such a special day, but it would be something old, something borrowed, and something blue.   I suppose if we were to sew it into our dresses in a functional way, such as a pocket, it could also be something new, too. 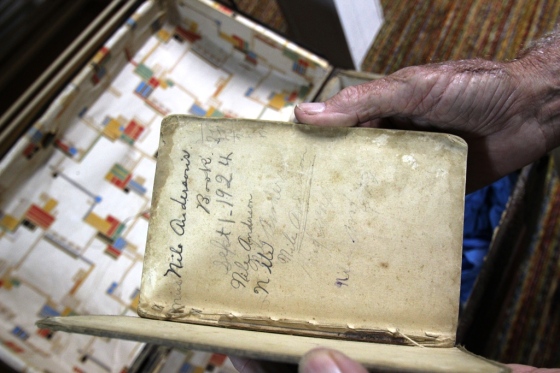 This book belonged to Papa’s uncle Nile, who I believe would have been my great great Uncle.

So I went home without a skillet, but Papa cooked up quite a family history lesson for me.

I went to up to Kentucky to visit the grandparents this week.  And I FINALLY had a mess of beans to pick out of the garden! I headed over to Granny and Papa’s from Grandmother’s Thursday morning, and not long … END_OF_DOCUMENT_TOKEN_TO_BE_REPLACED

This is my (very dirty) car, Chino, sitting in my grandparents’ driveway in Kentucky.

Why is this noteworthy?

Well, let me tell you.

I’ve never been able to just drive to my grandparents’ houses in Burkesville, Kentucky.  Having lived in the Northeast and about 1000 miles from my grandparents my whole life, any visit involved at least one plane ride (usually 2) and then a 2 ½ hour drive from the airport in either Louisville or Nashville to rural Kentucky.

Now that I live in Nashville, I can drive up to visit and be there in 2 ½ hours.  It’s glorious.

The blue Jeep, Azul, is my cousin Lauren’s.  Since this is Chino’s first time in Kentucky, he and Azul had never met and they are just tickled to death (a favorite Southern saying) to finally be together as family.

Naturally, as soon as I arrived in Burkesville, we had to eat.  We went to one of my favorite little spots on the square in town: Annie Ruby’s.

Now, Annie Ruby’s is in the location that was formerly Smith Pharmacy.  My papa thinks it had been open since the town was founded in 1810.  He said that when he was little a single ice cream cone was a nickel and a double was 10 cents.  My parents used to go there as kids for ice cream and orangeades, which they could purchase for something like a quarter. This was pretty amazing (even back then) since it took 2 fresh, sweet oranges to produce enough juice for this specialty.

My cousins, sister and I had a summer ritual at Smith Pharmacy when we were growing up where we would go sit at the old-timey fountain and order coke floats after a long day in the office (more on this later).  They had the BEST old school vanilla ice cream that was sort of a creamy yellow and then they would pour over the fountain coke to create the perfect ice cream to coke ratio.  This sounds pretty basic, but there’s quite an art to making a coke float.  Trust me, I’m a coke float connoisseur. 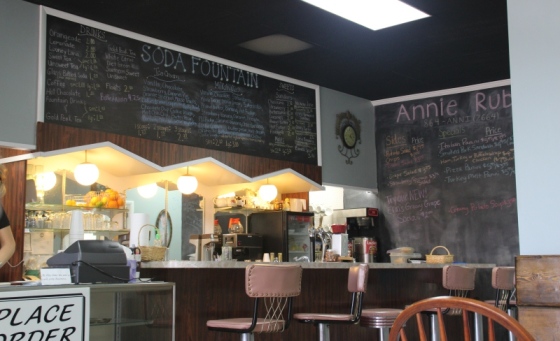 While we were devastated when Smith’s pharmacy went out a little while back, we were so excited to learn that Annie Ruby’s would be opening with good food and with the fountain.  It’s the same fountain that was in Smith’s and they do a darn good job with the coke float.  Their curry chicken salad is also pretty delicious if you want something to go with that coke float.  Actually, maybe eat the sandwich first and then savor the coke float.

Annie Ruby’s is known for “tomato pie,” which I’m sure is delightful, but unfortunately I’m some sort of genetic mutant and do not like tomatoes.  As my granny says, “what a shame” because my papa grows a whole mess of tomatoes that the rest of my family lives for.

Now, if you’ll excuse me, I’ve worked up a craving for a coke float.

Y’all come back now, ya hear?