Growing up, the Cumberland County Fair Demolition Derby was the highlight of my summer.  We always planned my visit to Kentucky around the fair and when I was in elementary school, I even arrived several weeks ahead of time to prepare myself for Derby night.

I also went to Kentucky to see my extended family.  I didn’t go just for the fair. Although, I wouldn’t have put it past my 8 year old self to do such a thing. 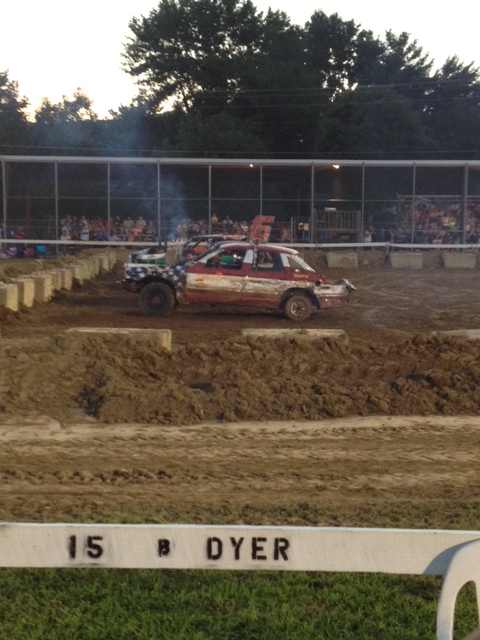 Cousin Lauren and I would get so excited in the days leading up to the Demolition Derby.  Granny made us take naps even though we were well past the age of napping.   We had to take naps because, back then, when there were 8 heats for compact cars and 6 or 7 heats for full-size cars, the derby often went until 3, 4 or 5 AM.  And guess who was not about to leave before it was over?

Haha. That was a joke.  Papa turns in around 8 PM so it was a late night for him if he stayed until 9PM at the derby.

The answer to my question is me and Cousin Lauren.  We took in every second of the derby as diehard fans.  So, we obliged Granny and took “naps” on the recliners in the Den.  I think we mostly pretended to nap, but at least Granny got us to sit still for about an hour.

I’ve been going to the derby for as long as I can remember.  I suppose I started going around age 5 or 6 and loved it instantly.

Apparently, after my first derby experience, I came back and talked Grandmother’s ear off about the derby, clearly excited by the whole thing.   I told her that there were cars flying everywhere, fires, and that I thought perhaps a man had even been killed.  Somewhat disturbingly, I was not bothered by any of that.  In fact, I couldn’t wait until the next one.  (Just to clarify: no one was killed.) 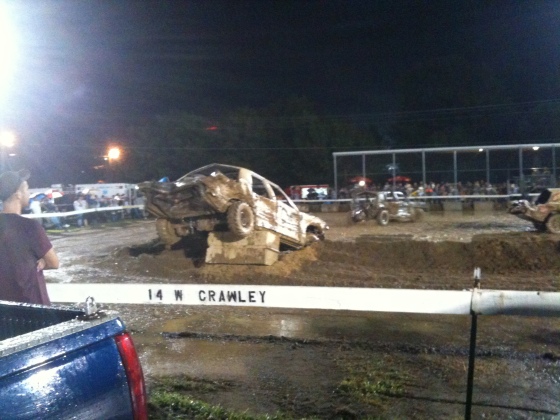 To be fair, I have seen many exciting things at the Demolition Derby: fires, fights, men knocked unconscious, broken arms, cars wedged onto logs, cars fly over logs (they now use cement blocks to make the ring instead of logs), women driving more competitively and strategically than the men, and the list goes on.

What a cultural experience.   I’ve loved every second of it.

This event and the truck and tractor pulls tend to be quite loud.  Cousin and Lauren and I were often handed wadded up paper towels to stick in our ears.  Who knew that they were not only liquid absorptive, but sound absorptive as well.

These days, kids wear those fancy noise-cancelling headphones.  We had it rough. 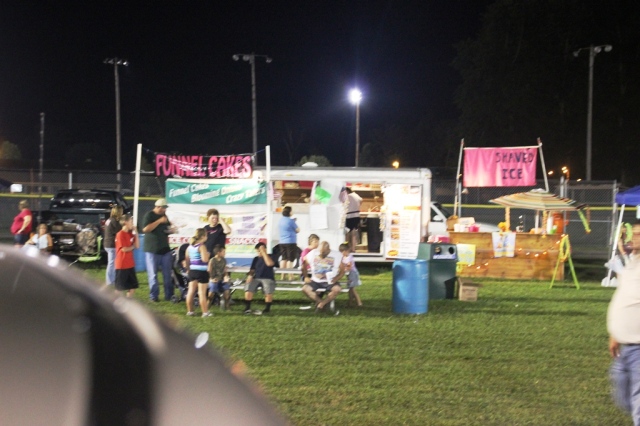 This year was the first year in almost two decades that I missed the Cumberland County Fair Demolition Derby.  I was devastated that I couldn’t go, but I work in retail and had to work Saturday and Sunday and the Derby is always on a Saturday night as the main event of the fair.

I don’t know if I’ll ever get over it.

9 thoughts on “The Demolition Derby”