I was up in the wee hours both Saturday and Sunday this past weekend.  Not because I was out partying and living it up.  Not by choice.  In fact, I’m almost certain I was in bed by 11 PM both evenings.  By choice.  I had been up earlier that preferred several times last week and was looking forward to some much needed restorative sleep.

About 3 AM on Saturday, I was in a deep sleep, dreaming of wonderful things.  Suddenly, I was accosted by a blaring alarm.  At first I thought it was the house alarm, but then remembered I hadn’t set that.  I then realized it was the smoke alarm about 10 feet from my head.  I was familiar with these things chirping if the battery was dying or sounding if I had burnt something in the kitchen, but never had one caused temporary deafness for no apparent reason.

I tried the reset button and a new battery, but that only resulted in a few minutes of relief until I was again jarred out of my sleep and sure my heart rate would never return to normal.  Thankfully my parents were in town so I went to get my dad to see if he could get the alarm to stop.  I felt bad that I had to wake him up (somehow my parents had slept through the alarm blaring…) but he was able to take down the defective alarm so I could sleep in peace for the next few hours.

Last evening, I went to bed on the early side because I was tired from the previous night’s excitement.  Around 4 AM, I wake up to some sort of ruckus coming from the other room.  I turn on the lights and walk down the hall toward the noise.  It seems to be coming from the family room.  I come into the family room and find Miss Scarlett with her back to me in the far corner.  Upon closer inspection, I see that she has a mouse cornered, on his back, with his arms up in the air as if surrendering and pleading for his life.  No exaggeration.

He tries to get away a few times and she smacks him back into the corner with her big, furry paws.  I moved to go get a box or some vehicle for escorting the mouse out of the house and must have distracted Scarlett in doing so.  Little mousy made a run for it.  Scarlett and mousy made dozens of laps around the coffee table until Scarlett was able to force him into another corner where I had several bags of fabric samples.  Trying to escape the furry beast, the mouse backed up the side of one of the bags and fell in.  Somehow Scarlett seemed to miss this development and proceeded to nearly hyperventilate as she furiously sniffed all of the other bags and the space between them.  Meanwhile, I crossed the handles of mousy’s bag so he couldn’t jump out as I took the bag downstairs and out to the porch.  I opened the bag and leaned it over.  Mousy scurried out into the darkness.  Back upstairs, Scarlett looked confused as to where the new toy had gone.

After reenacting the last thirty minute’s sequence of events to each my mom and dad, my head hit the pillow pretty hard.  Scarlett slept off the excitement all day on the sofa. 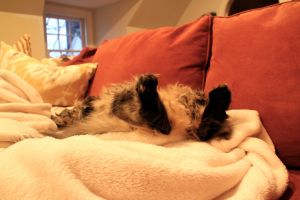 Today, I bought some not so cheap restorative moisturizer that has extract of every plant known to man that will hopefully erase my newly acquired wrinkles, age spots and bags under my eyes.

Hopefully I will make it through the night undisturbed.