I’m back on a food network kick and it seems everyone is making chicken pot pie these days.  This dish has never held much appeal for me but the more I watched Barefoot Contessa, The Pioneer Woman and Trisha Yearwood prepare it, the more I wanted to make it.  It just seems like a hug in a dish.  A highly-caloric hug.

I reviewed a couple of recipes and made up a hybrid of sorts.  I pulled out some chicken breasts from the freezer, an onion, the remaining celery from some lentils I had made early in the week, white wine, half and half, and some butter.  I needed only a couple of things from the store: fresh thyme, carrots, chicken bouillon cubes and refrigerated pie dough.  I didn’t make my own crust because I couldn’t stand to think about all of the shortening and butter atop this already cream-based dish and I didn’t feel like pulling out and cleaning my 49lb food processor.   If I don’t have to measure out the fat, it doesn’t exist as far as I’m concerned.

Now, as I was thinking about making this dish, I realized that I didn’t have any ramekins or personal-sized soufflé dishes.  I decided to swing by the home section at Marshalls to see if they had anything inexpensive.  All they had were miniature Le Crueset square baking dishes in red.  While they were reasonably priced, I have mustard-colored Le Crueset and my OCD self would not let me purchase a non-matching color.

I headed over to Big Lots.  On my way into the store, I caught a renegade shopping cart that started careening down the parking lot and towards an unassuming parked vehicle.  I stopped the cart about a foot shy of a big old dent in the side of this car.  As I neared the door to the store, a man waiting in a truck rolled down his window and yelled, “Nice save!”  For my good Samaritan efforts, I thought maybe the baking dish gods would reward me by having the right ramekins in this store.  Nope.  At least I worked off a few calories in the high-speed cart chase.

I recalled Kroger had a nice selection of well-priced baking pans and dishes so I ran in there quickly.  Sold out in the size I needed.  Of course!  I was about to bite the bullet and hit up William Sonoma when I remembered Pier 1.  They had just the thing at just the right price.  Success!

I primarily used The Pioneer Woman’s recipe from her first cookbook, substituting half and half for heavy cream and fresh thyme for dried.  I also added in peas because they’re cute and tasty and a little cayenne pepper for a kick.  I was pleased with the result but I might consider adding a little bit of dry mustard next time or perhaps some curry powder.  I might also consider a smaller ramekin next time because I feel like I just ate a rock.  Back to Pier 1!

I did use some smaller disposable pans so I could stick the rest of the recipe in the freezer. Aren’t they precious? 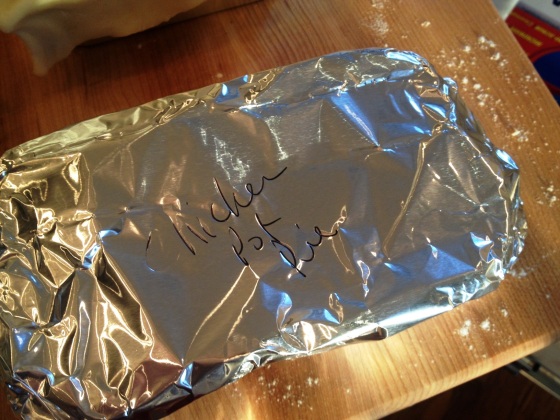 P.S. I sprinkled these dough scraps with cinnamon and sugar and put them in the oven to bake with my pot pie.  It was a sweet little snack!