Earlier this week, a very angry storm rolled in.  I didn’t even know it was coming until I was watching the local 6:00PM news and the weather forecaster starting listing off the times the storms would hit each town nearby.  The storm was due to arrive in my town at roughly 6:27PM.  I walked out onto my porch around quarter after and this was my view to the Northeast.

I thought to myself that the weatherman might be onto something here.

Storm a comin’ for sure. 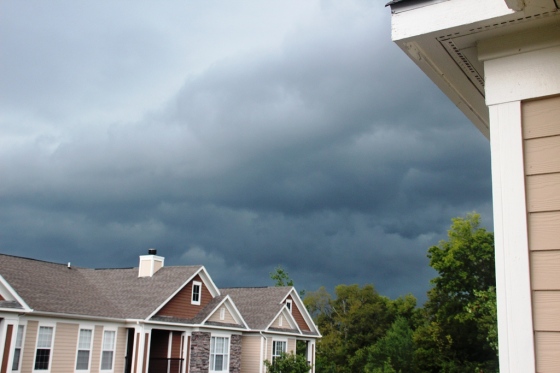 Extremely low, angry clouds.  This might have been the lowest I’ve ever seen them around here.

I decided this would be a great time to test out my new wide-angle lens.  The distortion compounded the drama of the menacing scene unfolding overhead.

When I turned to take a picture facing Southwest, the wide-angle lens produced these nearly black and white photos.   I haven’t the faintest clue why this occurred, but I loved the effect.

The clouds continued to move in and darken the sky prematurely.

I’m really into this wide-angle lens happy accident of a photo. 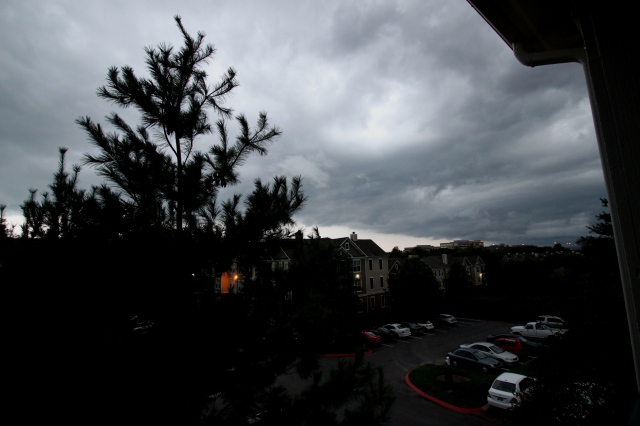 Only a sliver of daylight remaining as the storm took over the sky. 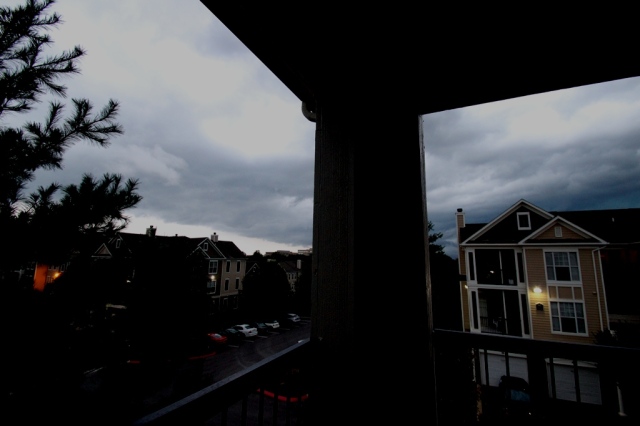 The thunder and lightning became more and more intense as the core rain shaft appeared behind the building opposite mine.

The clouds were practically sitting on that roof as the storm intensified, the rain shaft glowing an eerie blue-green.

The lightning was so bright I could sense it through my closed blinds and the subsequent thunder was so loud that my windows shook as the sound bounced off the hills that surround me.  It even caused a few looks of concern from my cat Scarlett.

I took this photo with my iphone because I’m not quick enough with my real camera to capture moments like this.  I’ll get there someday.  And when I do, my pictures will be a lot crisper.  Even still, I love this photo.  Mother Nature is just fascinating.

Y’all hold her in the road,